III. How Does the LIHTC Program Work?

The pool of 9 percent credits in any given year is limited. For each state, the annual volume cap for 9 percent tax credits is measured as the product of a fixed per capita rate multiplied by the state’s population. The credits are allocated by state HCAs through a competitive process.

Federal law requires each state HCA to have a qualified allocation plan (QAP), which sets out the state’s priorities and eligibility criteria for awarding 9 percent tax credits as well as state tax-exempt private activity bonds.29 The QAP gives preference to projects that

A state’s QAP may give bonus points to projects with specific goals and set aside a percentage of credits (targeted tax credit allocations) for projects that serve specific populations or locations.30

The 4 percent credits are roughly equal to 30 percent of the qualified basis of a newly constructed building or the cost of the acquisition and substantial rehabilitation of an existing building.36 Because the 4 percent credit is much shallower than the 9 percent credit, project sponsors/developers of 4 percent tax credit projects often seek additional funding through numerous sources, including but not limited to such federal programs as the HOME Investment Partnership Program (HOME),37 the Federal Home Loan Bank Affordable Housing Program, and the Community Development Block Grant Program. Other sources may include state agency loans and private foundation grants. Appendix B illustrates an example of a 4 percent LIHTC project.

The benefit of combining tax-exempt bond financing with 4 percent LIHTCs is that these tax credits are not in competition with projects seeking the 9 percent tax credit allocations.

If a project is located in a difficult development area (DDA) or a qualified census tract (QCT), the eligible basis38 of the project can be increased by 30 percent. This allowable increase is commonly referred to as a basis boost.39 DDAs are locations that have high construction, land, and utility costs relative to the area median gross income. QCTs are tracts with a poverty rate of at least 25 percent, or tracts where 50 percent of the households have incomes below 60 percent of the area median income.40 For properties placed into service after July 30, 2008, HCAs have the authority to select specific buildings not already in DDAs or QCTs to receive the 30 percent basis boost. 41 This building-specific designation is not available for projects financed with tax-exempt bonds. Appendix A illustrates how a 30 percent basis boost is applied.

Claiming the Credit and Project Compliance

LIHTC investors can begin claiming tax credits only after the buildings are placed in service and are occupied by qualified tenants and proper filings have been made with the state HCA and the IRS.42 The rental units must be leased to income-eligible households, and the rents must be within allowable limits. Although tax credits are claimed annually over 10 years, the investment compliance period continues until the end of the 15th year, and the project must remain affordable for at least 30 years. Corporate and eligible individual investors can benefit from the partnership’s pass-through of real estate losses, such as depreciation and interest expense, associated with income-producing real estate.

Table 1 illustrates the combined benefits of a sample 9 percent transaction. If the qualified basis for an LIHTC project is $10 million, then 9 percent credits produce an annual tax credit of $900,000, totaling $9 million for the investor over 10 years. 43 The table shows an additional estimated $2,205,294 generated through various real estate losses—such as depreciation and interest expense—that are passed through to investors. The combined tax benefit is $11,205,294 over the life of the investment. 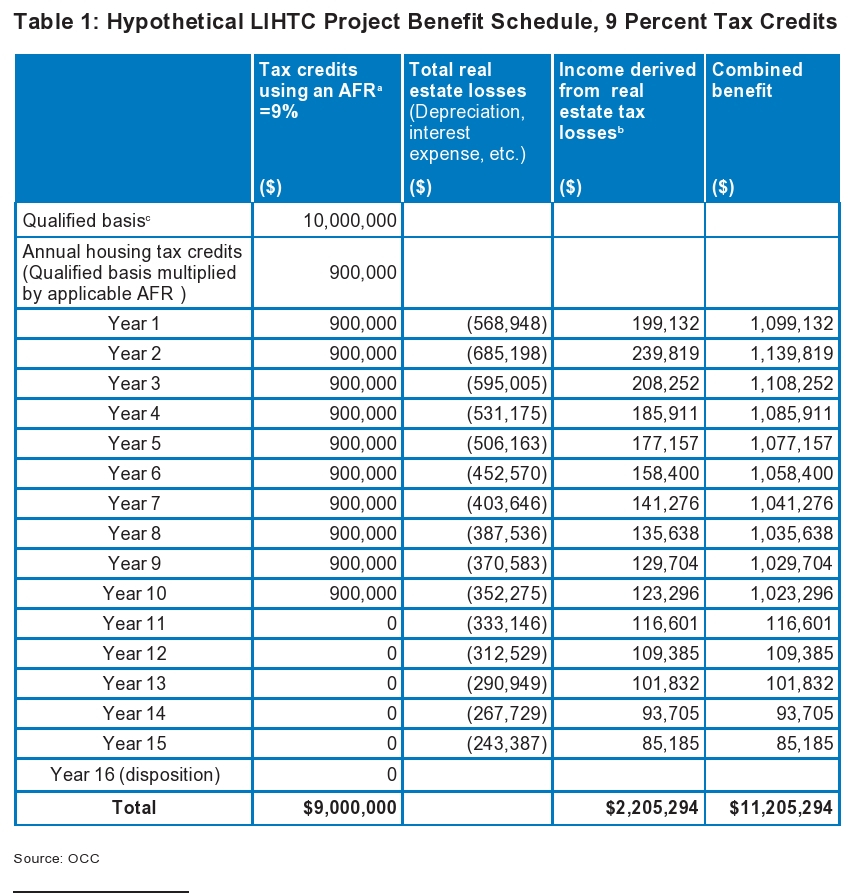 a The applicable federal rate (AFR) represents the IRS method of calculating the present value of the credits to investors. In accordance with section 42 (b)(2), the IRS publishes monthly AFRs for the LIHTC program. The AFRs are indexed to 10-year U.S. Treasury bond yields. ERA established a floor of 9 percent on the credit for non-federally subsidized rehabilitation and new construction buildings placed in service after July 30, 2008, with respect to housing credit dollar amount allocations made before January 1, 2014.

b The tax losses an investor may receive on a property are based on the amount of equity contributed to the project. In this example, $7.2 million ($0.80 per credit) was contributed as equity. Real estate losses in each year are calculated assuming an annual corporate tax rate of 35 percent. At disposition, any remaining tax capital is lowered by distributions of remaining cash or losses from sale, so that the amount of cash and losses equals the original investment. For the $7.2 million equity investment, total net tax benefits from real estate losses are $2,205,294. This example assumes no cash distributions.

The amount of real estate losses varies by year. In this table, the year 1 tax benefit of $199,132 is equal to $568,948 (year 1 losses) multiplied by the corporate tax rate or 35 percent. The project becomes operational, creating a somewhat higher tax deduction in year 2. Accelerated depreciation of the underlying assets (principally site improvements and personal property) results in a declining balance of tax deductions through year 15. The residual property value in this table is zero.

Excluded are land, commercial space, and any portion of professional fees (such as consultant or developer fees) that are above state-determined limits.

If the partnership fails to comply with LIHTC-rental rules at any time during the 15-year compliance period, any previously claimed credits may be subject to recapture. If the compliance issue is not resolved within the “cure period,”44 any future credits are also jeopardized.

During the compliance period, the LIHTC-financed units must be rented to income- eligible tenants, and rents must be within allowable limits. Projects with credits allocated after 1989 must be rent-restricted and occupied by income-eligible households for at least 30 years. 45 This 30-year restriction period, including the 15-year compliance period, is called the “extended use period.”

Some investors choose to exit the partnership before year 15. Their exit has been made easier by the regulatory removal of the recapture bonding requirement for properties placed in service after July 30, 2008. Investors should consider, however, that the threat of recapture still exists through year 15, even if they have exited the transactions before this time.47

26 The amount of credits that a project owner may claim with respect to a building is based on the percentage of the building that is occupied by low-income tenants. The qualified basis is generally equal to the product of the low-income occupancy percentage and the eligible basis (e.g., construction costs less land cost, disproportionate standard costs, commercial property, permanent loan costs, syndication costs, and the cost of tenant facilities if additional charges for use).

28 A federal subsidy is any debt obligation the interest of which is exempt from tax under 26 IRC 103, or a direct or indirect federal loan, if the interest rate on such loan is below the applicable federal rate (AFR) in effect as of the date the loan was made. Pursuant to the Housing and Economic Recovery Act of 2008 (HERA), “any below market federal loan(s)” were removed as one of the ways a building could become classified as federally subsidized. This effectively changes the definition of federally subsidized to only mean tax-exempt bonds. These new laws are effective for buildings that are placed in service after July 30, 2008. See Low-Income Housing Tax Credit Handbook, Novogradac, 2011.

29 See 26 IRC 42(m), which sets forth the QAP requirements for HCAs. For a detailed discussion of QAPs by the National Low Income Housing Coalition, see http://nlihc.org/issues/other/lihtc.

30 The HCA’s selection criteria must address the following: location, housing needs, public housing waiting lists, individuals with children, special needs populations, whether a project includes the use of existing housing as part of the community revitalization plan, project sponsor characteristics, and projects intended for eventual tenant ownership. Because these criteria are minimums, states can adopt more rigorous criteria aimed at meeting specific housing needs in the state. See 26 IRC 42(m)(1)(C).

34 For buildings placed in service on or before July 30, 2008, a new or substantially rehabilitated building that receives a federal subsidy is not eligible for the 9 percent credit. Instead, it is eligible for the 4 percent credit. HERA removed the phrase “any below-market federal loan” as one of the ways a building can become classified as federally subsidized. For buildings placed in service after July 30, 2008, the definition of federally subsidized means only those projects financed with tax-exempt bonds.

35 The actual tax rate is not exactly 4 percent. This rate, commonly referred to as the applicable federal rate (AFR), is indexed to 10-year U.S. Treasury bond yields. Monthly AFRs are available in table 4 at www.irs.gov/app/picklist/list/ federalRates.html.

43 The annual 9 percent housing tax credit calculation is based on the flat 9 percent rate.

44 A provision in a contract allowing a defaulting party a specific period of time to fix the cause of the default.