Negotiating the Best Position for the PJ

Due to project viability considerations, HOME funds will most often be provided in the form of a soft loan. This term refers to a loan that has one of the following repayment structures:

When structuring a soft loan, PJs need to consider the interest rate, loan term, repayment requirements, lien position, and sale /refinancing requirements. The LIHTC project sponsor may have certain needs and preferences about how the PJ structures these terms, because of the impact of these terms on the investors’ taxes (and their resulting impact on the price of the credits). These terms should be discussed and negotiated before the PJ finalizes its loan structure. This is because loans increase the amount of eligible basis in the project. IRS regulations require that loans are likely to be repaid; and therefore the HOME loan will need to be structured in a way that demonstrates it is likely to be repaid. 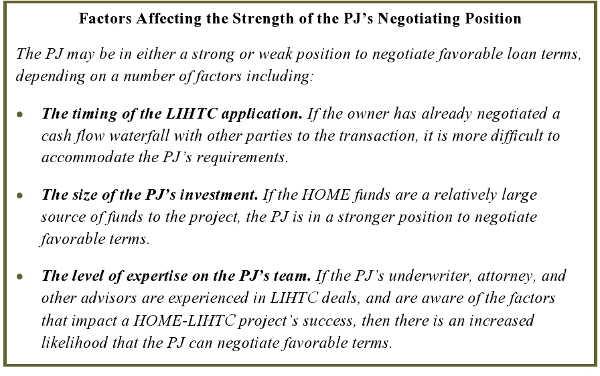 Factors Affecting the Strength of the PJ’s Negotiating Position

The PJ may be in either a strong or weak position to negotiate favorable loan terms, depending on a number of factors including:

LIHTC owners typically prefer HOME loans that have as long a term as possible. One reason is that it may be important for income tax purposes to demonstrate a reasonable expectation that the loan will be repaid from cash flow and sale proceeds. All else equal, extending the term of the HOME loan increases the likelihood that it will be repaid. It is a good practice for PJs to develop policies for the maximum loan term that the LIHTC owner finds acceptable.

Typically, PJs are more interested in ensuring the long-term affordability of the project than maximizing repayment of HOME funded loans. Consequently, when lending HOME funds to projects, PJs often offer loans at the lowest rate of interest and the longest term that are acceptable to both the PJ and the LIHTC owner.

In HOME-LIHTC projects, negotiations regarding priority are likely to arise in at least these areas:

It is a good practice for the PJ to have clear requirements, stated in its Request for Proposals (RFP) or Notice of Funding Availability (NOFA), regarding repayment provisions, and for these requirements to strike a reasonable balance between meeting the PJ’s needs and providing the LIHTC owner with sufficient flexibility to achieve a successful project. Otherwise, the owner can (and likely will) claim that it was not aware of the PJ’s requirements, that the owner has already negotiated the cash flow waterfall, and that it is simply not possible to accommodate the PJ’s requirements.

In structuring their HOME loans, many PJs require the HOME loan to be due on sale. Many LIHTC owners, however, want to be able to sell the property, and to refinance the first mortgage, without triggering repayment requirements for the HOME loan.

The PJ, however, will not want to grant these types of concessions routinely. It should consider the following issues regarding assumption of the HOME loan by a subsequent purchaser:

Because assumption decisions typically require case by case judgment, it is difficult to state these sorts of requirements in advance, so it is a best practice for HOME loans to be due on sale, allowing the PJ to later negotiate transaction-specific terms.

Issues that may come up regarding a potential future refinancing include: