Capital planning for affordable rental housing can be summed up simply: stuff wears out. Importantly, however, the rate at which the various building systems wear out is well known and replacement costs also are well known. As a result, it is possible to estimate how much money will be needed to cover replacements, year by year, as the property ages. This analysis is called capital needs assessment or capital planning. Exhibit 2-14 provides a simple capital needs assessment in the form of a spreadsheet. 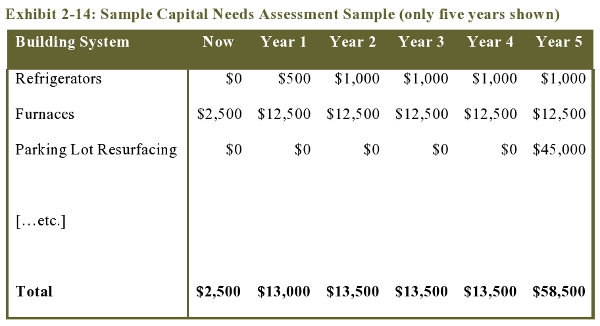 Actual capital needs assessments typically evaluate building systems over a 20-year period. Twenty years is used because most major systems require at least one replacement during that time frame. The column labeled “Now” may also be labeled “Rehab” or “Year 0” or “Required Repairs.” It indicates replacements that are needed because the inspector found (for example) a furnace that was not working and was old enough to require replacement.

The Total line tells the owner and PJ how much money will need to come from Replacement Reserve withdrawals, future cash flow, future refinancing, and possibly future subsidies, in order to maintain the proposed project. The cost of replacing capital items is not reflected in the operating expense underwriting or budget of the property.

Below, Exhibit 2-15 illustrates the annual capital needs, per unit, that a newly constructed property might expect to incur over its first sixty years.

The capital needs are virtually nonexistent in the first five years, small in years 6-10, and then increase steadily over the next 20 years, with a peak in years 21-30 when a number of major building systems (typically, roofs, siding, windows, and parking lots) require major repair or replacement. 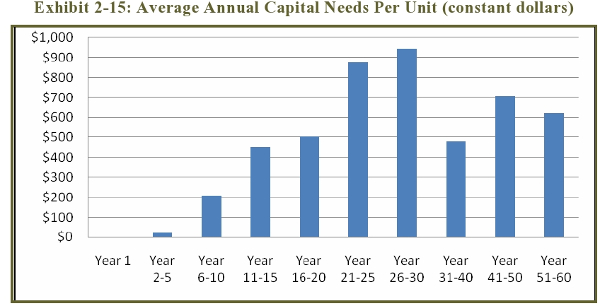 Funding agencies made two primary responses to this set of problems: