Overview of the LIHTC Program

Before considering a HOME funding request for a project that has, or is expected to have, LIHTCs, PJ staff should become familiar with what LIHTCs are and how the LIHTC program works.

What is a Low-Income Housing Tax Credit?

The U.S. Congress authorizes each state to allocate a certain number of Federal low-income housing tax credits (LIHTCs) and issue up to a specified amount of tax-exempt bond financing annually. The state’s allocation threshold is based on its population. Internal Revenue Service rules found at Section 42 of the Internal Revenue Code (IRC, or “the Code”) govern the LIHTC program. Each state establishes additional requirements and program priorities for the credits it administers.

The state reserves LIHTCs for approved affordable housing projects that meet certain affordability criteria for up to 30 years. These Federal tax credits are sold to investors as a way to raise cash equity for eligible affordable housing projects. In exchange for cash up-front, the investor receives a tax credit (dollar for dollar reduction in its Federal tax liability) each year for a period of ten years. The IRS enforces compliance with the LIHTC affordability restrictions for 15 years. The LIHTC compliance period is the 15-year period during which a project must continue to comply with the various LIHTC requirements to avoid any tax credit recapture. The compliance period begins with the first taxable year in the credit period. The extended use period is a date specified by either the LIHTC allocating agency or 15 years after the close of the compliance period. During this extended period, the use of the property is restricted to affordable low-income housing.

State’s Role in the LIHTC Program

Each state allocating agency is required to issue a Qualified Allocation Plan (QAP) to document how it plans to make the tax credits and tax-exempt bond financing available to developers. The QAP is published annually. It contains vital information on the LIHTC program requirements and the state’s funding preferences, in terms of the types of projects and locations in which it wishes to invest. Further, it explains the funding process, and identifies application deadlines and when funding decisions (called reservations of credits) are made. Each state’s QAP typically contains separate sections discussing the allocation procedures and requirements for 9 percent LIHTCs and 4 percent LIHTCs.

Each state is required to conduct public hearings in the process of developing the QAP.

One key source of information for the PJ about the state allocating agency’s funding priorities is the state LIHTC Qualified Allocation Plan (QAP). When PJs know and understand the state’s LIHTC priorities, they can better target HOME funds to projects that are the most fundable. Local PJs may also wish to discuss rental housing priorities with state staff, through the formal public hearing process on the QAP, and through other informal opportunities that arise."

Virtually all LIHTC projects are developed as single-asset entities , meaning that the ownership entity has a single property in which all revenues, expenses, assets, and liabilities are accounted for together.

LIHTC projects are typically owned by one of the following two types of legal entities:

Role of the LIHTC Investor

The state’s reservation of credits is not money from the state LIHTC allocating agency to the developer. Instead, the allocation gives the owner the right to sell the reservation of LIHTCs to an investor. The investor purchases the LIHTC allocation at a price determined by the market for the credits for which the investor receives a 99 percent plus interest in the LLC or limited partnership that will own the project. In exchange for the infusion of cash equity, the investor receives its 99 percent ownership share plus the annual tax credits (a dollar for dollar reduction against its Federal income tax liability) over the first ten years, followed by an additional five- year affordability requirement, even though no additional tax credits may be claimed in those years.

Direct investment is the simplest form of LIHTC investment: a large corporation purchases the entire investor interest in the project. By contrast, in a syndicated transaction, the investor interest is purchased by a fund or investor pool composed of many investors. Syndicated transactions are organized by LIHTC syndicators, who recruit corporate investors, create investor funds / pools that appeal to a wide array of investors, and represent the investors for purposes of getting the project funded, completed, leased-up, and operated in accordance with all applicable compliance requirements.

The entity that applies for HOME funding is typically the owner, developer, or sponsor of a project. Applicants for LIHTCs are generally referred to as “LIHTC project sponsors.” Under LIHTC, this would typically be either the owner or developer of the project. An LIHTC project sponsor is not the same as a sponsor under the HOME Program. Under HOME, a sponsor is a community housing development organization (CHDO) that works in partnership with another nonprofit to develop and manage a property in certain circumstances. Unless otherwise specified, this publication uses the term “owner” to refer to LIHTC project sponsors as well as developers and sponsors of HOME projects."

The key differences between the two forms of Federal LIHTCs are summarized in Exhibit 1-1.

Because of the greater potential financial benefit of the 9 percent tax credit, these are in greater demand, and are therefore allocated competitively, according to the state allocating agency’s annual QAP. Typically, 9 percent LIHTC applications are received only once a year (although some larger states might have more than one funding “round” to allocate credits.) Most state allocating agencies use a point-scoring system to evaluate applications; this system is described in the QAP. Some states create a pool of potential LIHTCs that are reserved for particular types of projects (such as preservation projects in rural areas) or for particular types of sponsors (such as nonprofit sponsors or public housing authorities). Within each pool, the highest-scoring projects that meet all threshold requirements are selected to receive reservations of LIHTCs.

Because 4 percent credits are not in as high demand, most states accept LIHTC applications and issue reservations on a noncompetitive basis year-round. However, 4 percent LIHTC applications must still meet the state’s threshold requirements in order to be eligible to receive a reservation of tax-exempt bond authority. Tax-exempt bond financing must be used in conjunction with 4 percent LIHTCs. The associated tax-exempt bonds can be issued by any state or local agency that has the legal authority to issue bonds (for example, a state housing finance agency, a local public housing authority, or a local redevelopment agency).

Exhibit 1-1: Summary of Key Differences in 9 and 4 Percent Tax Credits

How LIHTC Equity Is Calculated

The amount of LIHTC equity that can be secured for a project depends on a number of factors:

Exhibit 1-2 illustrates the relationship of these variables and how the LIHTC equity is calculated. 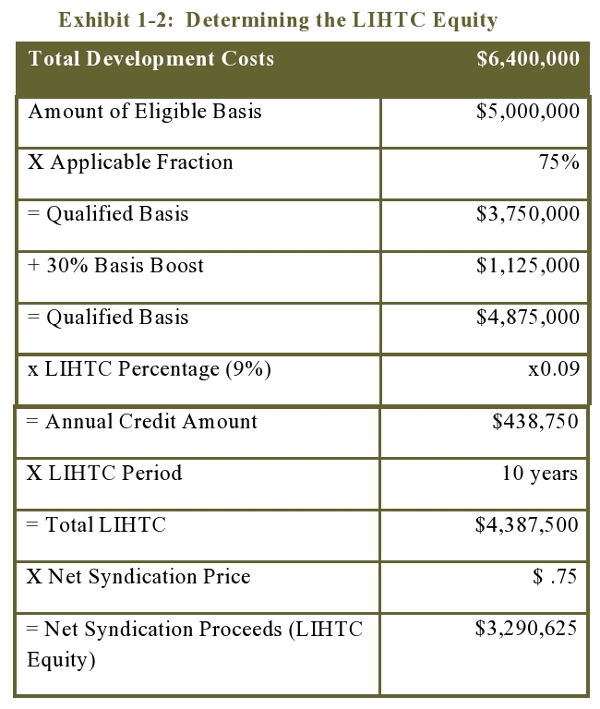 Eligible basis. Eligible basis is the amount of the development cost that is LIHTC- eligible (excluding land and certain other costs that are not depreciable). This concept is discussed in more detail in Chapter 2.

LIHTC period. The LIHTC period is the ten-year period over which the investor may claim the LIHTCs. This is also sometimes referred to as the “credit period.” This is not the same as the 15-year compliance period (the period during which the IRS can recapture the tax credits from the investor for noncompliance with the affordability restrictions.)

Total LIHTCs. Total LIHTCs equals the qualified basis multiplied by the LIHTC percentage multiplied by ten years. This is the total dollar amount of LIHTCs that the owner is expected to receive over the ten-year credit period.

Historically LIHTC prices have been stable and there has been an adequate market of potential LIHTC investors. As a result, developers had high confidence that an LIHTC reservation could readily be converted into LIHTC equity. However, financial upheaval in 2008 created significant stress in the LIHTC equity market, demonstrating that there can be unpredictability in this market.

In summary, many of the largest LIHTC investors lost confidence that the business environment would be profitable. Without anticipated profits, there would be no Federal income taxes; and without tax liability, there would be no need for credits. The market stopped purchasing LIHTCs. This has had two primary results:

Recent market trends dictate that the PJ understand that the demand for tax credits can change over time; one cannot assume there will always be a supply of investors. PJs should discuss this issue with the state allocating agency when making decisions about funding tax credit projects. In addition, PJ underwriters should consider the following:

There are three primary deadlines in the LIHTC program:

Once the state makes an initial reservation of LIHTCs for a project, the developer must incur 10 percent of the reasonably expected eligible basis within 12 months of when the LIHTC reservation was made. This is called the carryover requirement. Although 10 percent must be spent, the expenditures need not be for basis-eligible items. Once this threshold is achieved, the developer receives a “carryover allocation” from the state; that is, the state allocates the remaining credits to the project. If the developer is unable to spend 10 percent of the reasonably expected eligible basis within 12 months, the project loses the credits and they are reallocated by the state to another project. (Note: the Housing and Economic Recovery Act of 2008 extended this expenditure deadline from six months.)